Sometimes called “Blue Cardinal Flower” because of its strong resemblance to its close relative the Cardinal Flower, L. cardinalis, with which this species apparently hybridizes. The unattractive species name comes from an old belief that it was a treatment for syphilis. The Plant Fact Sheet (PDF) from the Natural Resources Conservation Service adds that “The Meskwaki ground up the roots of this plant and used it as an anti-divorce remedy.” What America needs today is more ground-up Lobelia siphilitica roots.

The flowers are variable in color: some are solid pale blue, some darker blue, and some—as here—strongly bicolored. A white form is found occasionally.

Like the Cardinal Flower, this Lobelia likes damp situations; these were blooming at the end of August in a roadside ditch near Cranberry.

LOBELIA [Plumier] L. Calyx 5-cleft, with a short tube. Corolla with a straight tube split down on the (apparently) upper side, somewhat 2-lipped; the upper lip of 2 rather erect lobes, the lower lip spreading and 3-cleft. Two of the anthers in our species bearded at the top. Pod 2-celled, many-seeded, opening at the top. — Flowers axillary or chiefly in bracted racemes ; in summer and early autumn. (Dedicated to Matthias de l’Obel, an early Flemish herbalist.) 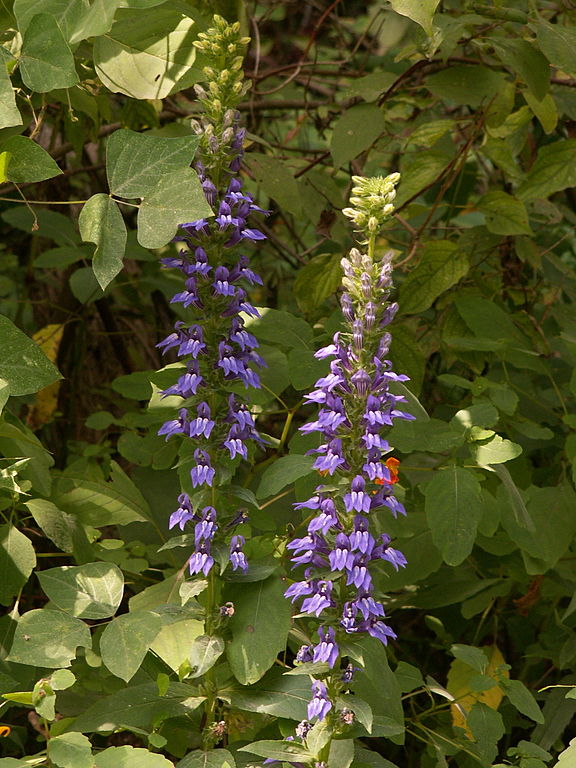 The pictures in this article have been donated to Wikimedia Commons under the Creative Commons CC0 1.0 Universal Public Domain Dedication, so no permission is required to use them for any purpose whatsoever.