Why is this clump of Bloody Butchers here? It was blooming in early May in Bird Park, Mount Lebanon—but neither Gray nor the USDA PLANTS database places any wild populations of Trillium recurvatum anywhere in the Pittsburgh metropolitan area, or even within two hundred miles. It is a prairie-state plant, almost unknown in Ohio, and not common till Indiana, although (oddly) there is apparently an isolated wild population way over in Lancaster County, Pennsylvania. Since we first photographed this stand last year, the clump has doubled in size, so it is well established; but there is not another anywhere in the park. Have we discovered another isolated wild population, like the one in Lancaster County? Did someone mistakenly introduce this plant to Bird Park on the assumption that it was a native wildflower? Introduced or not, it is thriving and multiplying, so we have to call it naturalized now.

The Bloody Butcher is similar to the Toadshade (Trillium sessile), which also has mottled leaves and upright mahogany flowers; but the species name recurvatum points out the distinctive feature of this plant: the sepals that curve backward, and the petals that curve back in, making a little enclosed apartment to give the pollinators some privacy. If, however, we have wrongly identified this plant, we trust that the Internet will come to our rescue and correct us.

TRÍLLIUM L. WAKE ROBIN. BIRTHROOT. Sepals 3, lanceolate, spreading, herbaceous, persistent. Petals 3, larger, withering in age. Stamens 6; anthers linear, on short filaments, adnate. Styles awl-shaped or slender, spreading or recurved above, persistent, stigmatic down the inner side. Seeds ovate, horizontal, several in each cell. — Low perennial herbs, with a stout and simple stem rising from a short and praemorse tuber-like rootstock, bearing at the summit a whorl of 3 ample, commonly broadly ovate, more or less ribbed but netted-veined leaves, and a terminal large flower; in spring. (Name from tres, three; all the parts being in threes.) — Monstrosities are not rare with the calyx and sometimes petals changed to leaves, or the parts of the flower increased in number.

Ovary and fruit 6-angled and more or less winged.

T. recurvàtum Beck. Leaves contracted at the base into a petiole, ovate, oblong, or obovate; sepals reflexed; petals pointed, the base narrowed into a claw, oblong-lanceolate to -ovate, dark purple; fruit ovoid, strongly winged above, 1.8 cm. long. — Rich woods, O. to Minn., Ark., “Miss.,” and Tenn. 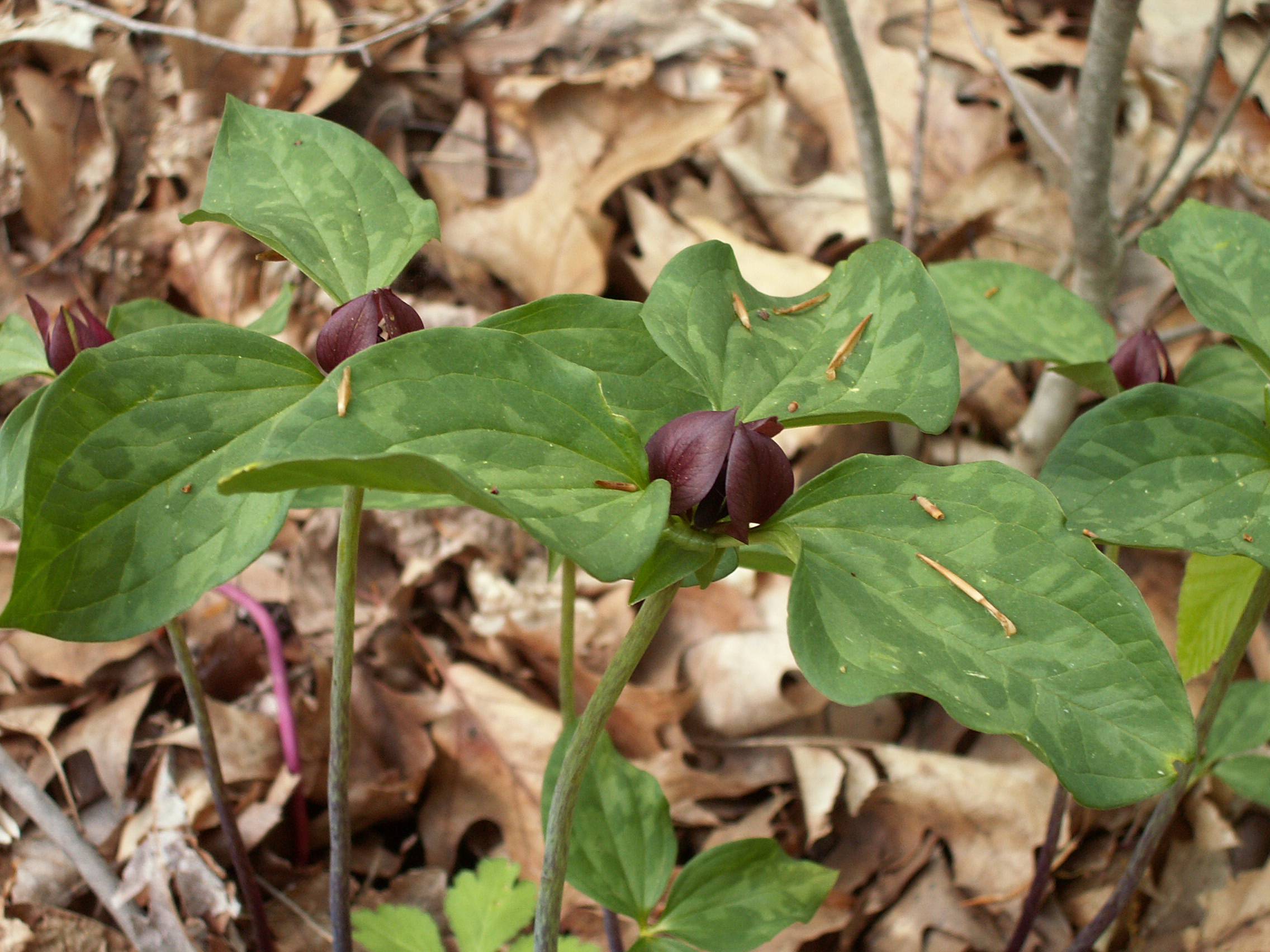