This little creeper, found in shady lawns everywhere, bears bland, tasteless fruit that looks like wild strawberries, but it’s easily distinguished by its yellow flowers. Children like to tell each other that the fruit is poisonous and then dare each other to eat it. It’s perfectly edible, but not really worth eating. It is nevertheless much valued by herbalists, who suppose it to have useful medicinal properties. These plants were growing in a lawn in Mount Lebanon, where they were blooming and fruiting in late May. 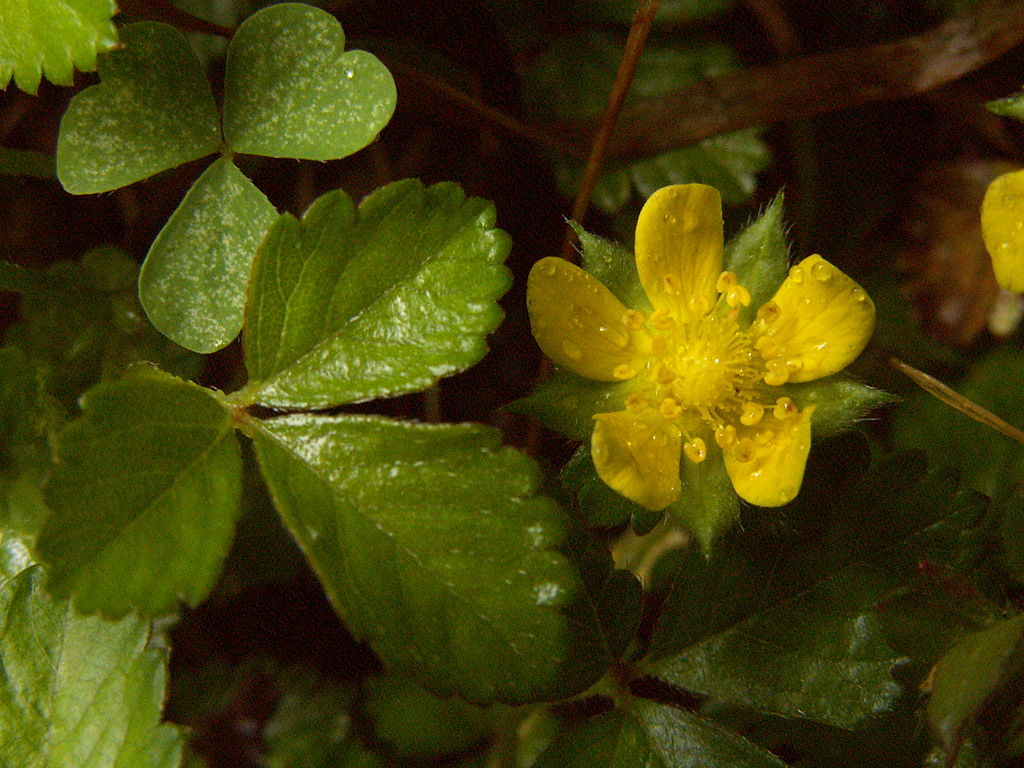 The word “Indian” in the common name of a North American plant often means “not really.” Indian Tobacco is a lobelia; Indian Bean or Indian Stogie is the Catalpa tree. So it comes as a surprise that this plant, which seems to fit perfectly into that pattern, is actually an Asian import, named not for the aboriginal Americans but for India.

Although most references place this species in the genus Duchesnea, it seems that modern genetic research (perhaps unsurprisingly) makes it a Cinquefoil in the genus Potentilla. It is not the only “Cinquefoil” with the wrong number of leaves.

Gray describes the genus Duchesnea and the species:

DUCHESNEA Sin. INDIAN STRAWBERRY. Calyx 5-parted, the lobes alternating with much larger foliaceous spreading 3-toothed appendages. Petals 5, yellow. Receptacle in fruit spongy but not juicy. Flowers otherwise as in Fragaria. Perennial herb with leafy runners and 3-foliolate leaves similar to those of the true strawberries. (Dedicated to Antoine Nicolas Duchesne, an early monographer of Fragaria.)